On my quest to live a less toxic lifestyle, one of the things I’ve had the hardest time finding a replacement for is deodorant.  Believe me, I’ve tried everything.  I’ve tried the crystals, and that left me with a wet and smelly rash.   Tom’s of Maine? Oh yea I tried that too… and that had me out here smelling like the great outdoors in about 30 seconds.  I’ll call Tom’s the Bubbalicous bubble gum of deodorant.  You know how when you chew Bubbalicous the flavor is amazing for the first 30 seconds and then it’s absolutely gross?  Yea that’s exactly how Tom’s deodorant was!   I’ve also tried products from Hugo Naturals, EO and Botanical MD and all of them failed me… EPICALLY!

I’ve only had luck with two natural deodorants thus far, Piperwai which I wrote about here and Primal Pit Paste. 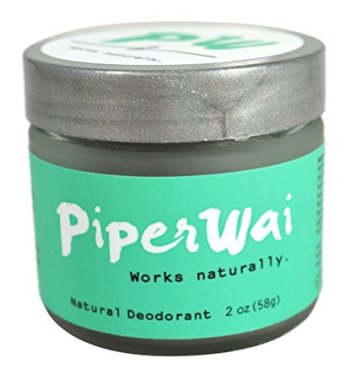 The weather in the DC  area has been crazy, so this winter we’ve seen a lot of 80 degree days.  Piperwai does not work for me on 80 degree days and by the end of the day I smell like a 13-year-old boy who just got done playing street ball… not a good look!   I decided to run to Whole Foods to see if I could find an alternative, before going back to Dove until the weather made up its mind of whether it was going to be spring or winter.  I stumbled upon Primal Pit Paste.

I decided to try it because I always saw the advertisements on social media about how great it was.  Let me just say… the ads were not lying, it really is good!  Here’s why:

I sweat a lot,  and we all know sweat smells!  Primal Pit Paste proved that it could conquer my sweat issues and leave me odor free.  The non-aluminum baking soda in it tackles the odor while the organic arrow-root powder in it keeps the skin dry.  The jars come in three different strenghts: light, regular and strong.

It Contains Ingredients We Can Pronounce

Primal Pit Paste contains minimal ingredients and all of them are easy to pronounce.  Each scent contains different ingredients, the lavender scent I purchased contains:

The company stands by their product and guarantees that their products are made with love and are cruelty free.

It Comes in Different Scents.

While I was in Whole Foods I only saw the lavender scent, but upon going online I saw that it comes in nine different scents: Jacked up Jasmine, Lavender, Thyme & Lemongrass, Orange Creamsicle, Royal & Rogue, Spice, Patchouli, and Unscented.

One jar of Piperwai will run you about $12 if you buy it in store, and if you buy it online its $12 plus shipping.  A jar of Primal Pit Paste is only $8.

It Comes in a Mini Size, and a Stick Formula

If you just want to sample Primal Pit Paste, you can go on their website and purchase a mini jar of the product for just $3.95.  If you’re like me and feel that you need to try out more than one scent, a six-pack sampler can be purchased for only $2o.

One thing that I don’t like about Primal Pit Paste is having to dig my finger in the jar to get the deodorant out, so I was excited when I found out that they had a stick formula.  The stick formula can be purchased for $10.95 and works just as well as the jar formula.  The only problem is, it doesn’t come in different strenghts *sad face*

If you’re looking for a natural deodorant Primal Pit Paste is definitely the way to go!  Its inexpensive, it smells great and it actually works! Find out which stores near you sell Primal Pit Paste here.

This site uses Akismet to reduce spam. Learn how your comment data is processed.